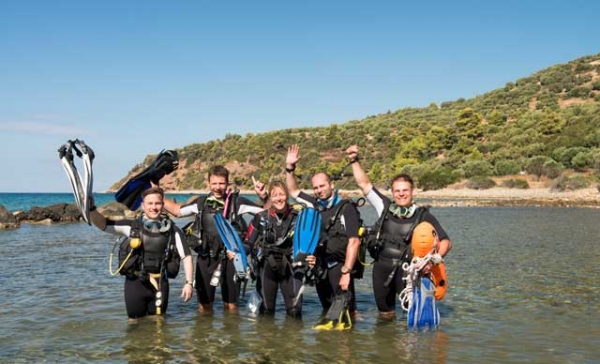 Recreational SCUBA diving is still a relatively young sport. Created in the 1950s, it gained acceptance in the ’60s and ’70s, boomed in the ’80s and took great technological leaps in the ’90s. Much of the sport’s popularity came from the access created by the charter yacht industry. The best dive sites in the world can now be reached by booking a private charter yacht in locations such as the Florida Keys, Bahamas, and the Caribbean.

If you’ve been diving for decades, there’s a good chance that not everything you learned in your open-water class still applies. New research and equipment have made diving safer and more enjoyable than ever—if you know the rules. We thought we’d take a look at some of them and see how they’ve evolved.

Old Rule
Most divers have been taught to go to their greatest planned depth early in the dive and then gradually work upward in a regular “stair-step” pattern. Similarly, they’ve been told to make the deepest dive of the day the first one. The rationale was that the shallower depths later provided decompression for the preceding greater depths.

Reason for the Change
Because Dive Computers can track your depth and time constantly and are pretty good at math, itis possible to know your nitrogen exposure accurately regardless of your profile. Tables, by contrast, can account for only your greatest depth, and this crude approximation of nitrogen exposure still mandates a conservative approach.

Exceptions to the Rule
Obviously, divers using only tables must still follow the old rules. And even when using a computer, it’s still smart to dive deeper first. Ascending profiles give you more bottom time and a greater margin of safety against DCS.

New Rule
The Recreational SCUBA Training Council, which sets many industry standards, dropped its minimum age requirement for junior certification near the end of 1999. As a result, PADI, SDI, SSI and NASDS (which has since merged with SSI) dropped their minimum age requirements for junior certification to ten-year-old. That means they can get a PADI Junior SCUBA Diver, and 8-year-olds can enjoy PADI’s Bubblemaker and Seal Team programs, which are held in a pool in less than 6 feet of water. SSI has a pool-only “SCUBA Ranger” program for 8- to 12-year-olds.

Reason for the Change
To promote the sport. lots of divers have kids, and with the growing popularity of resort course diving means that there is now a market for family dive vacations. “The future of diving will be determined by kids,” says Bret Gilliam, president of SDI, the first agency to lower the age. “It’s a great step forward to recognize the family unit as key to our sport’s growth.”

Exceptions to the Rule
It’s still up to the instructor to decide whether a child is mature enough to dive. Being 10 years old does not create a right to be certified.

The new junior certifications typically have various restrictions. In PADI, kids are limited to 20 feet in confined water first, then 40 feet in open water. Juniors must be accompanied by an agency-affiliated instructor, a certified parent or another certified adult. Check specific agencies for their rules.

Reason for the Change
For customer convenience, smaller agencies with few instructors in place at resorts found it necessary to band together to offer greater options — especially when certification standards are virtually identical.

Exceptions to the Rule
It can be a matter of trust. Some students may not be comfortable “switching” instructors, so they may prefer making their open-water checkout dives with the same instructor who was with them the first time they took their first breath underwater in a pool.

New Rule
Ascend no faster than 30 feet per minute — one foot every two seconds.

Old Rule
The old rate was 60 feet per minute until the U.S. Navy adopted the 30-foot-per-minute rate in 1996 and training agencies followed suit.

Reason for the Change
The Navy studies found that a 30-foot-per-minute rate resulted in fewer cases of DCS than the older 60-foot-per-minute rate. A slow ascent is really a rolling decompression stop, allowing your body to flush out and exhale dissolved nitrogen before it forms bubbles.

Exceptions to the Rule
The 30-foot-per-minute rate may not always be practical for the whole ascent, especially when you are deep and low on air or approaching hypothermia. In that case a faster rate, up to 60 feet per minute, is acceptable, but for the final 60 feet of your ascent, you should slow to 30 feet per minute.

New Rule
Make a safety stop at the end of dives. That means you should pause at about 15 feet for a minimum of three to five minutes before your final ascent to the surface. Some experts recommend safety stops as long as 10 to 15 minutes under certain conditions.

Old Rule
Make a what? Safety stops were not taught prior to the mid-1980s.

Reason for the Change
The new rule recognizes that all dives are decompression dives, and that DCS can and does occur even when you’ve stayed within so-called “no-decompression limits.”

Studies clearly show that pausing at about 15 feet allows you to off gas nitrogen before ascending through the zone of greatest pressure change, near the surface. Nitrogen that hasn’t been eliminated can bubble out of tissues rapidly during the last part of the ascent, causing DCS.

There are other safety reasons for the stop. The air in your BC and the bubbles in your wetsuit also expand rapidly during the last 15 feet and may cause you to become significantly positive without realizing it. Stopping gives you a chance to adjust your buoyancy so you don’t lose control of your ascent.

Exceptions to the Rule
You needn’t stay at exactly 15 feet, especially if you’re elbowing a crowd of other divers. Anywhere between 10 and 20 feet is fine. And although three to five minutes is a good minimum, longer, deeper dives call for longer safety stops.

Old Rule
Dump all air so you are negative before beginning your ascent and fin upward against negative buoyancy.

Reason for the Change
The old rule was designed to prevent runaway ascents. But Navy studies revealed that the strain of finning hard while ascending sometimes causes divers to hold their breath. Also, it can lead to air trapping in the lungs. Both present embolism risks. The change also reflects greater confidence in modern BCs, particularly their dump valves.

Exceptions to the Rule
In an ascent from very shallow depths, say 30 feet or less, it’s OK to fin up against slight negative buoyancy. The risk of losing control because of rapid buoyancy changes in your BC and exposure suit, along with the low stress in finning such a short distance, makes this the better bet.

New Rule
In a no-air emergency, depend on a redundant system such as your buddy’s octopus, or making an independent emergency ascent, do not attempt to “buddy breathe” from a single regulator unless you and your buddy have practiced it.

Old Rule
Before octopus, ponies and devices like the “Spare Air” were common, divers were taught to pass one regulator back and forth while making a slow ascent.

Reason for the Change
Experience has showed that unless both buddies had practiced buddy breathing and were skilled at it, the attempt was likely to injure both divers, not just one.

Typically, buddy breathing divers become so absorbed in passing the regulator that they neglect to control their buoyancy, and a too-rapid ascent with embolism could result. Or the diver who has passed the regulator holds his breath instead of exhaling slowly, also an embolism risk.

If you are out of air and neither you nor your buddy has a backup system, your best move is to make an emergency swimming ascent: swimming to the surface while keeping your throat open by slowly exhaling.

Every training agency is emphatic on the need to always dive with a buddy. Yet solo diving has long been common, particularly among underwater photographers. Experience, and incomplete statistics, don’t indicate that solo diving is more dangerous than buddy diving, and some divers argue that solo diving is actually safer.

Most of us were taught that a snorkel is mandatory gear on every dive, just like a pair of fins. But increasingly, divers are leaving the snorkel in the gear bag much of the time.

Why? They’ve come to the conclusion that a snorkel, when attached to your mask, is more often a hazard than a help. The long tube—dangling from its midpoint so the hook-like gizmos at the ends can wander around — and is pretty effective at catching kelp, fishing line and camera straps. Ggiven the importance of your mask, your mask strap is about the worst place to mount it anything else.

Many divers now save the snorkel for special occasions, like a long surface swim from their entry point to the dive site, and carry it in a pocket or strapped to their body.

Four Benefits of a Sailing Vacation

Are you looking to see the Caribbean up close and personal? If so, you need to consider this unique type of sailing vacation. Unlike a large cruise ship, a private charter yacht allows you to set your own pace and itinerary. It can be as action-packed as you like. Or you can just kick back […]

Private Charter Yacht vs. Cruising Aboard a Big Cruise Ship

There are a boatload of reasons why a private charter yacht cruise is better than a cruise ship vacation. Here are four of the biggest considerations. Itinerary & Pace of the Cruise On a private yacht charter, you’ll have input on which ports you want to visit. You can consult with your captain to design […]

Are you considering a British Virgin Islands sailing charter for your next vacation? Then it’s time to consider what you’ll want to see and do while you are there.  The island of Tortola is filled with surprises! Enjoy the spectacular vistas from the top of Sage Mountain, the highest point in the British Virgin Islands. Or hike […]